“It is tough to watch another person being beaten. And I’m not a proponent of what some might view as child abuse. But when the person being beaten is harming his community and his future and the person doing the beating is his angry mother, she gets no argument from me — because she was right.” –Jonathan Capehart 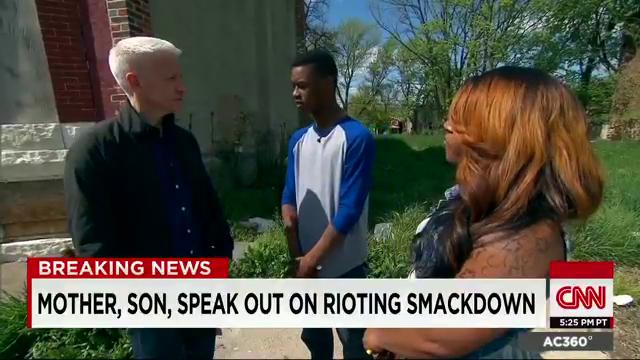 Thank God for a good mom!

I do not see Toya Graham as a hero. Rather, I find her ordinary, sympathetic, and reasonably enraged by the enormity of injustice proliferating around her, from reports of horrific police brutality to the arsonist riots. In short, I see her as a loving mother doing what she can in an awful situation most of will hopefully be blessed never to experience.

I can understand why many people in and watching the media have hailed her for snatching up her riotous son from his criminal path. She did a good thing, and hopefully her son will profit from her care. I cannot understand why anybody should think the celebration of Graham is the latest footnote in a long essay on “white supremacy” that apparently underlies the multicolored criticism of the Baltimore riots.

Among the many contemptible expressions that littered the reactions to the responses to the riots was this particular gem of mind-numbing inanity from Salon’s Joan Walsh:

“The hypocrisy of the white mainstream applauding Graham is sickening. Let’s be honest: many white folks are reflexive critics of the greater frequency of corporal punishment in the black community.  Witness the media horror at Minnesota Vikings running back Adrian Peterson beating his young son. If Graham beat her child like that in the aisles of CVS, you can be sure somebody would call CPS.”

It is difficult to know where to begin with the things that are wrong with this paragraph (among the many other things wrong with the broader article). So for starters, let’s posit that a mother slapping at a teenage boy for participating in a riot is on a different plane of action from a professional football player whipping a small boy so viciously that the boy suffered bleeding wounds on his back, legs, and genitals. Let’s also posit that had Graham “beat” her teenage son in the aisles of CVS for attempting to burn down that CVS, nobody would call CPS, though many Americans would still call that mother a hero.

I will even go so far as to add the radical claim that many a parent would have handled themselves with considerably less self-control were their child to join a riot and then treat his outraged mother with such repeated disrespect as that teenage boy did his mother. It is unclear to me what race has to do with any of that.

In the interest of being philosophically and discursively charitable, I clicked on the link Walsh included in that excerpted paragraph and discovered another Salon article from Brittney Cooper, a biracial Princeton alumna from D.C. who now teaches middle school in New York City. The article peddles a familiar (and erroneous) trope that white people do not discipline their kids, while black people do. Moreover, it ties in the discredited myth that Michael Brown was murdered, rather than killed for attacking an officer, to suggest the purportedly broad racial disparity in corporal punishment is indicative of black parents focusing too much on “producing well-behaved children in a world that clearly hates them.”

Cooper’s article and argument are infinitely more sympathetic than Walsh’s subsequent screed, and I can certainly share her frustration at unregulated children frolicking as public testaments to infuriating parental disengagement (or worse, appeasement). But ultimately the analysis is flawed in part by presuming a dark conclusion—that the world hates black people—and extrapolating false claims—that Michael Brown was murdered, or whites are profoundly averse to disciplining their children—from that conclusion.

Spanking—or, more clinically, corporal punishment—is not a black phenomenon. It is and has been an incredibly common mode of discipline across racial, ethnic, and socioeconomic lines. While there may be some degree to which that method is declining, especially among the kind of well-to-do urbanites who comprise the media elite, corporal punishment remains far more prevalent than most media would have you believe.

Insofar as there are demographic differences, spanking is exceedingly common in the South, regardless of race or class. A Time article on a Dallas study from 2011 documented several dozen families in which spanking small children, even for petty misbehavior, was so common and “normal” that the presence of recording devices in their homes did not keep parents from doing so.

“The parents who recorded themselves represented a socioeconomic mix: a third each were low-income, middle-income and upper-middle-class or higher. Most were white; about a third were African-American.”

Relatedly, Harry Enten at FiveThirtyEight took an extensive look at the General Social Survey’s findings about opinions of the acceptability of spanking. As of 2012, the GSS noted the highest levels of acceptance of corporal punishment among blacks, Republicans, born-again Christians, and Southerners—each at about 80 percent. The nation as a whole was at 70 percent (about where whites are generally).

As interesting as the racial disparity may seem (10 points), it’s smaller than other disparities—regional (more than 15 points between South and Northeast), political (about 15 points between Republicans and Democrats), and religious (10-15 points between born-again Christians and everybody else). Moreover, blacks are famously more likely to be born-again Christians than other American racial groups. Likewise, most black Americans live in the South, and many of the minority who don’t have deep roots in the region. Similarly, Republicans—notably underrepresented among African Americans—are also more likely to be born-again Christians and live in the South, and as mentioned above, all four groups accept spanking at roughly equal rates.

As far as actually spanking children, beyond just accepting the practice, an ABC poll on the topic also found a pronounced regional disparity:

“Among Southerners, 62 percent of parents spank their kids; that drops to 41 percent in the rest of the country… The U.S. Department of Education has reported that school-sanctioned spanking is most prevalent in Southern states – Mississippi, Arkansas, Alabama, Tennessee, Oklahoma and Louisiana.”

Taken altogether, the relatively higher rates of approval for corporal punishment among black families is not quite as dramatic or distinctive as some media would have you believe. In all likelihood, the cultural differences between white Southerners—who are mostly Republican and largely evangelical—and black Americans—who are mostly Southern and largely evangelical—are simply not remotely as large or profound as some might think.

I’ve bonded with many fellow Southerners, black and white, over being sent out back as children to “pick a switch” and the various ways we would try (in vain) to find one that would not hurt much. I’ve also heard permutations of that singularly haunting phrase, “I thanked my parents for every spanking/whooping/beating I ever got,” with eerily kindred pride from countless people (most recently a young, Yale-educated, middle-class white woman from Mississippi) across the spectrum of color.

The experiences of fellow Southerner Elizabeth Spiers is an insightful example of the broader cultural point:

“My parents are Southern white fundamentalist Christians, and we grew up in a working class community where nearly everyone else was a fundamentalist Christian and about 65% of the population was white. I don’t think I can recall a single person I knew who didn’t get spanked as a kid. I also went to school for twelve years at a tiny segregation academy* that was not parochial, but still had teachers who felt comfortable reading Bible stories in class and taught Creationism as a competing theory to evolution. There were 32 kids in my graduating class and no black students. Corporal punishment was doled out as a response to any sort of misbehavior and the principal would even spank 16 and 17 year old guys who were on the football team.

So spanking was part of life–at school, at home and throughout the community. I got spanked and slapped across the face as a kid, and so did my brothers. And the fact that my parents did this made them no different from anybody else’s parents.”

The demographic peculiarities of her community and school aside, there is not much in that description of the pervasiveness of corporal punishment in Southern Christian life that would not strike many a black person in America as intimately familiar.

There are many problems that disproportionately plague black America, and there are various remnants of racism that make the struggles of life harder than they should be. But noting that black people are known to spank their kids or pretending that white people either revel in that violence or disdain it in racial snobbery is perhaps even less productive or valuable than arguing over the imaginary racism of describing looters and arsonists as “thugs.”

In closing, I should note that nothing written here should be construed as my endorsing corporal punishment. Having grown up in a world inundated by the crack of the disciplinary belt (and a legion of other objects)—like Spiers, Cooper, and so many other Americans—I wholeheartedly agree with Spiers’s take on the subject:

"I am one small cog in the vast machinery of everything wrong with this world." –Rek

"In truth, politeness is artificial good humor, it covers the natural want of it, and ends by rendering habitual a substitute nearly equivalent to the real virtue."
-Thomas Jefferson

A Cloud of Thoughts

Living a life of faith

My Life in Blog

The Story Of A Guy With Too Much Time On His Hands.

Thought Catalog is a digital youth culture magazine dedicated to your stories and ideas.

Just another Yankee adapting to life in the South... being a Damn Yankee

Rejection Letters of the Philosophers

...because it happens to us all.

Foot of the Fig Tree

An emotional and intellectual journey from faith to evidence.

Musings of the Madame

The Art and Craft of Blogging

4 out of 5 dentists recommend this WordPress.com site

The New York Observer’s political blog, your source for insider news on the politics, policies and personalities that shape the city, the state, the region and beyond.

The works and artistic visions of Ken Knieling.

Quotes on Freedom and the Great American Experiment

Ramblings from a citizen interested in Science and Politics